Exactly 392 days after we launched the Burrito Riders in Louisville, the Burrito Riders of Huntington embarked on our inaugural ride.  Strangely enough, despite being an early partner in crime with Tim on this adventure, I never actually went on a ride in Louisville.  Logistically speaking, with two small children, we didn’t see it as feasible.  So I have been burrito rolling, volunteer coordinating, editing blog posts, and  providing guidance and counsel for the last year or so.  Moving closer to family made it possible for me to finally make it out for a ride.  Having participated, I now understand what I have been missing.

We are fortunate in that the Huntington community has been very warm and welcoming to the Burrito Riders.  We already have a sizeable following on Facebook and a number of individuals have committed to volunteer their time.  This first ride demonstrated for me the passion that people in my hometown have for service.  We were blown away by our burrito count for the ride last week – over 130 burritos!  Black Sheep Burritos and Brews donated about 50 burritos, and plan to continue support, but the rest were contributed by individuals and families, some of whom had been following our exploits in Louisville.  It was really encouraging for us as riders.

Nine of us met near the Marshall University campus on 3rd Avenue.  I was immediately struck by the fact that we knew only two of the other riders prior to the ride and that our cohort included both a three year-old and a grandmother braving street riding for the first time.  Introductions were made and we set off up 16th Street to 4th Avenue in search of those that might be in need of a hot breakfast. 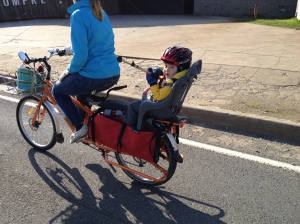 I was, admittedly, a bit nervous.  I don’t actually enjoy road biking even a fraction as much as I enjoy being on the trails.  The proximity of the cars makes me especially anxious.  However, I quickly discovered that riding in a group made me feel much more relaxed and comfortable.  Within a few blocks I stopped noticing the vehicles as they passed and was enjoying the company of my fellow riders.  Despite being stopped by every light on 4th Avenue, we quickly made it to the main branch of the library, where we assumed we might find some people in need.  It turned out that no one was around, so we moved on to the Homeless Veterans Center on 8th Avenue.  We were able to feed four people in this area, but quickly realized that where we really needed to be was Harris Riverfront Park.

We didn’t, of course, go into the ride blind.  Tim reached out to a variety of organizations and individuals involved with the homeless in Huntington to ask for advice regarding a ride route.  Most suggested that we simply serve at the riverfront with Bikers for Christ and a few area churches.  The work that they do is simply amazing.  This is an incredibly dedicated group of people.  They provide food, as well as other items (when available) on a weekly basis, going back 8 years.  There are two large camps, as well as several smaller ones along the river near the park, so this is an ideal area for service.  We were reluctant to go directly to the riverfront though.  We were concerned that we might miss some people if we didn’t ride around a bit first, but we also wanted to maintain the “ride” portion of Burrito Riders.  This ministry was attractive to Tim and I (and many of our volunteers) in part due to the biking component.  We did learn that most of those in Huntington who are hungry head down to the riverfront on Saturdays mornings, so, of course, we will always be there.  However, we are also exploring ride routes that would take us through Guyandotte or Old Central City prior to our final destinations at the river.

Upon our arrival at Harris Riverfront Park, I was awestruck both by the number of people in need that had congregated there, as well as by the number of those serving.  From what I was able to observe while distributing burritos, the other volunteers were handing out a biscuit with gravy, fruit, coffee, juice, peanut butter crackers, socks, and a variety of second hand clothing.  There was a very relaxed feeling of community and a diverse population being served.  As with my experience at the City Mission on Christmas Eve, I was disheartened to see so many children in need.  The nine of us moved through the crowd as they exited the line and tried to speak with those who accepted food from us.  It was an incredibly humbling experience.  I know it is cliché to say it, but we genuinely received a tremendous blessing from serving this community.

It was especially meaningful to hear their stories.  Over the last year, Tim has tried to express how badly the people the Burrito Riders serve just want to tell someone about their experiences.  Despite working with marginalized people in the past, I was unprepared for how forthcoming and earnest some of these people can be when trying to explain their circumstances.  We spoke with those who had recently managed to find affordable housing, but still struggled to meet their basic needs, those who had spent all winter living on the riverbank, those who had recently lost their housing, those who felt victimized by the system and the people in our community, and those who felt they had been fortunate to build relationships with caring individuals who were attempting to help.  There were, of course, also those who didn’t want to talk, who seemed a bit fearful, likely with good reason.

Tim being Tim, he quickly made a connection with a couple who spent the winter in a small camp with a handful of other individuals who were wary of the larger camps.  He asked what they needed at the moment, and they asked for water and blankets, two such basic items that I think the majority of us take for granted.  It was humbling, to say the least.

After a moment of gratitude and prayer with the others serving on the riverfront, we set off once again to return to our start point.  We debriefed a bit and discussed our experiences.  Stacy, a new friend who taught me that I needn’t have stayed home for the last year, but should have simply packed my kiddos along with me, suggested including outlying areas in our ride.  As I said, the route is still being developed, so we really welcome suggestions.  April, who I grew up with in Chesapeake and remember as the only other kid besides my sister who wanted to play outside at 7am during the summer, remarked that she had gotten to know some of those we served because she frequently rides the city bus.  She came along with us because she had previously recognized the huge need in our community.  Sean and I briefly discussed our love for camping and desire to do it more often, a conversation that, in retrospect, seems odd given that we had just left a group of people who were living outside because they have no place else to go, not because it is a vacation.  I think that, perhaps, it goes to show just how much our perspectives can be transformed from personal engagement with those in need.

After packing up our gear at the start point, my brother, Edison, Tim, Mitch and Bonita (the aforementioned grandmother), and I stood talking for some time.  We were all so energized, by the ride in the cool morning air, but, more importantly, by the incredible opportunity to serve and show some love to those often overlooked by society.  It is truly a life-changing experience.  I experienced it years ago when volunteering with immigration detainees in Virginia, but honestly hadn’t been involved with direct service to people in quite some time.  I had forgotten how impactful it can be.  I wasn’t kidding when later that day I posted on my Facebook status that giving can be addictive. 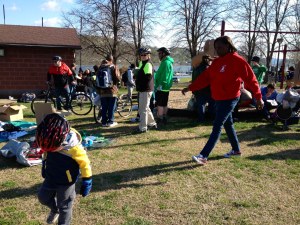