So much going on, so much to be excited about! First off, apologies for being a bit absent this week. I wanted to take some time to sit down and talk about a couple of things, including last week’s outing, but the week just kept getting away from me. Let’s get caught up! 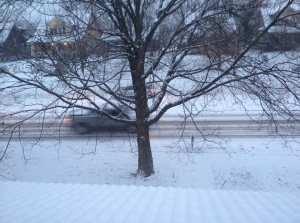 We were finally tested by the weather! We’ve been so fortunate to have been blessed with pretty decent weather each and every time we’ve gone out into he community with our burritos, at most dealing with a little bit of rain. This past week, we were faced with some snow and had to decide to ride, or not to ride (it was the question). Common sense prevailed, thank you Curt and Ryan (and all of our wives!) and we decided to leave the bikes at home and took our out deliveries by truck! Man, talk about getting our logistics ALL kinds of messed up! We were disheveled, to say the least, but we got it together in the end. Matt, Ryan, Curt, and I made the deliveries and got to catch up with a few folks.

One thing that was a bit of a bummer was finding out that someone had stolen Ray’s wheels! We’re going to talk soon about a couple of new projects we’re working on, I’m hopeful that I’ll get some writing done this evening. Anyhow, Ryan came to know Ray and discovered that one of the things that he most needed was to be able to find steady work, and be able to reliably get to and from work. We got together around a donated bicycle and, with Ryan doing most of the heavy-lifting on this one, made it possible for Ray to have a bicycle to rely upon. It was just a couple of weeks later when we encountered Ray, this past Ride, and discovered that someone had stolen his wheels. We picked the bike up, still locked where it had been at the time of the crime, and Ryan took it back to his house while we try and find some donated wheels so we can get Ray rollin’ again! In a related story, if you have any old 27″x1.25″ wheels you’d like to donate, we could use them. Email us to arrange donations of any bicycles or parts that you may like to share. 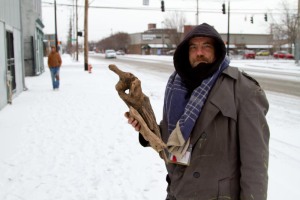 You guys may remember my earlier mention of Eric Thomas (AKA Driftwood) and his driftwood art. I hadn’t seen Eric in a bit, but we had a chance to hang out during our last ride. Eric had a bit of a dust-up with some folks, resulting in the loss of his bicycle and some of his personal property. We’re working on helping him out too, and he’s trying to get his driftwood site updated and back in business as well!

Keir’s got the goods!

All told, it was a really good day to connect with our folks and spend some time. We also took a couple of bags of warm clothing, pillows, and blankets down with us as well and distributed some of that around. Thank you to all the folks who donated those items! Also a Thank You to Matt Herp for coming out with us again (he’s becoming a real regular!) and taking some photos too. The folks we served were particularly excited that Matt remembered to bring the hot sauce! Matt, Keir’s got your refills!

We ride again this coming Saturday, the 16th! Come out with us and meet some of our friends.