Let me tell you a little about Warren. 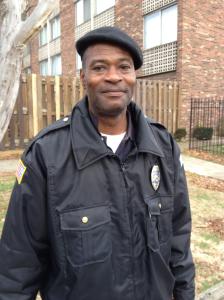 As we serve, many come and go. Some are quiet, preferring to get their burrito and go back to what they are doing, while others really seem to enjoy the opportunity for conversation, connectedness. Our food is fleeting, on the larger scale, but we hope that we are able to build relationships that will last far longer. It isn’t unusual at all for us to stop to hand out some burritos and become involved in lengthy dialog with some of our folks, providing us with an opportunity to understand them better in the hopes that we can better understand how to serve them.

This is Warren Chapman. He is one of our many “regulars,” who we look forward to seeing and checking in on. We’re really excited for Warren, he’s been working as a security guard for about 8 or so weeks now, taking care of his needs. I first talked with Warren about his job when he’d been working there about 2 weeks and he was so excited to have a light at the end of his tunnel. I asked him how he likes his job (he loves it) and if they (his bosses) treated him well. He just smiled this big smile and said that it didn’t matter because he has a job, and he’s taking care of himself again. He told me that he mostly worked by himself overnight, patrolling and monitoring the parking lots, and that they usually left him alone as long as he was doing a good job, which he was sure to point out that he did. He has an 8 year old son, Yahweh Warren, with whom he also hopes to be reunited once he gets himself into a better place. He is a man with big plans, optimism, and a lot of faith. When I stood next to him, as he told me about his life and his struggles, I couldn’t help but size myself up in my daily goals and accomplishments. On my worst day, I don’t have nearly the obstacles to overcome that he does, but I couldn’t avoid thinking of how much more I could be doing with my own life and opportunities.

He’s still living at Wayside, but he’s planning to move out after the holidays. He hopes to get into an apartment with the help of a Salvation Army program, so that he can free up his spot at Wayside for someone who needs it more. He’s also got himself a bus ticket to go home and spend Christmas with his elderly mother, whom he hasn’t been able to see in 8 years. I loaned him my phone so that he could call her and let her know what his plans were, his own phone was limited to local calls. From where I stood, I could tell that he was excited to see her. I could tell from his side of the conversation that she was fretting over the details of his travel. He was elated when he got off of the phone.

We are blessed to get to share in the lives of folks like Warren. There really isn’t very much that separates us from the folks we serve, many of them in a situation that they never could have foreseen ending up in. Beyond the folks who we encounter each time we ride, there are thousands more out there that are maybe one catastrophic event from poverty, living paycheck to paycheck, or not quite, and then a car breakdown or a trip to the ER sends them spiraling financially into the margins of society. Something as basic as teaching our kids how to be responsible with finances at a young age can help protect the next generation. As for Warren, I look forward to his updates when we ride, and he assures me that, even after he moves out, he’s still going to come see us on the 1st and 3rd Saturdays whenever he’s able! 🙂